JDA HELPS ‘BRIDGE THE GAP’​ BETWEEN STUDENTS AND PRINT 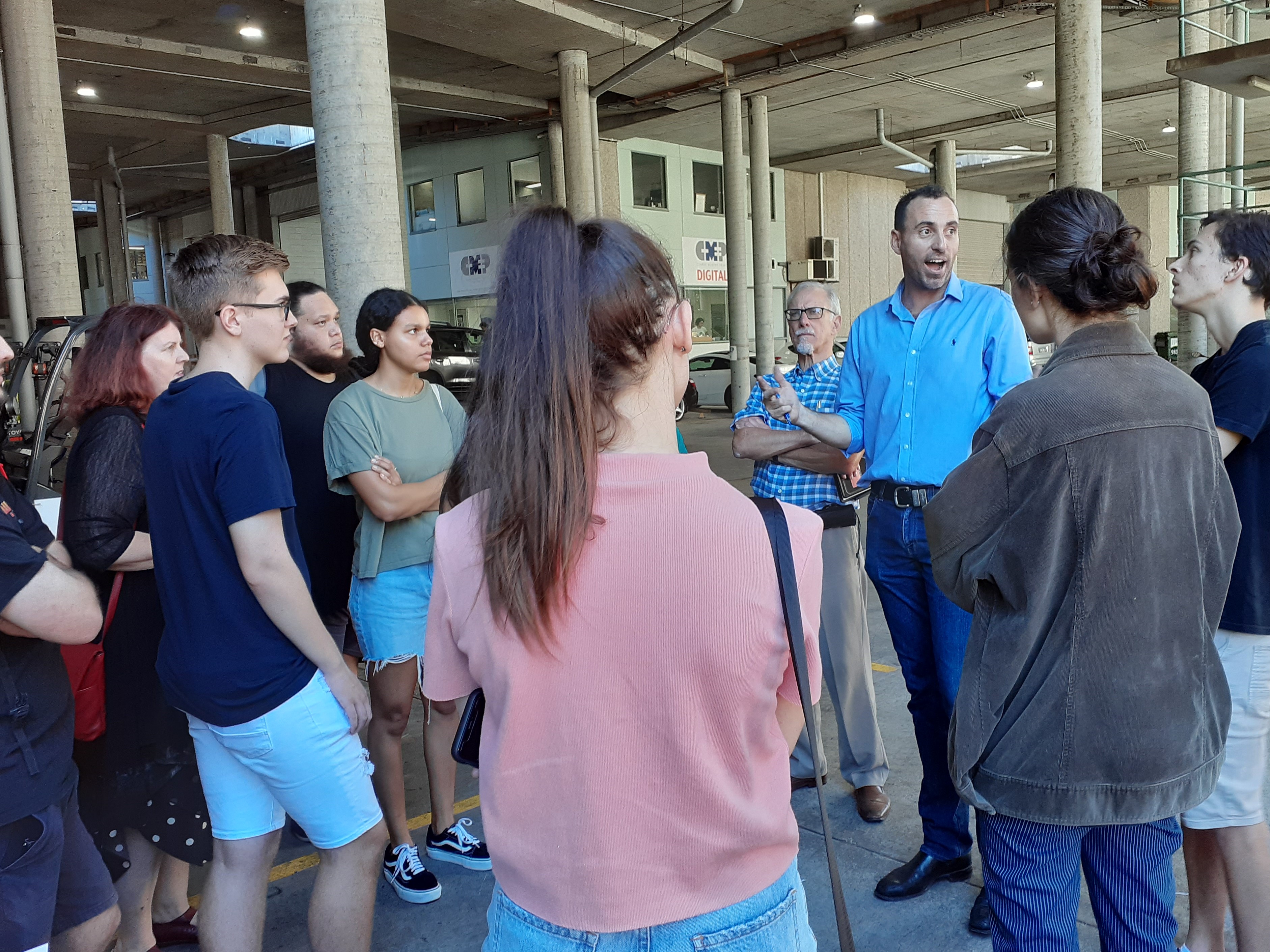 by VOICE OF THE INDUSTRY James Cryer

History was made today as a group of graphic design students from Sydney’s Hornsby TAFE college were introduced to the wonders of print as they were taken on a guided tour of the Alladin’s cave of delights, aka busy commercial printer, Clarke, Murphy Print, of Chatswood.

What made the visit so entertaining (and informative!) was the Sorcerer’s Apprentice himself – CEO Benn Murphy – who personally conducted the tour. Leaping about and gesticulating with the athleticism of an Olympic gymnast, he waxed lyrical about such matters as how to make a pre-press file print-ready – so much so I suspect some of the students thought he was reciting Shakespeare!

At times he was like the proverbial Pied Piper leading the students on a merry chase up stairs or down stairs following him like a whirling Dervish as he lured us (willingly!) from pre-press to the offset pressroom – to the digital area – where he miraculously produced a sheet from the Indigo, printed from a file he’d ”borrowed” from an unsuspecting student only moments before. Their looks of astonishment were priceless as the point was dramatically brought home that today’s print world is full of amazing party tricks!

From there, the magical mystery tour continued at warp speed through various other departments – bindery – finishing – die-cutting – wide-format printing – laser-cutting – until at last the students – and TAFE teacher, Jenny Young – were returned safe and sound to the office from which point we’d started an hour or so earlier. It had seemed like five minutes!

Puffing and panting and mentally exhausted (that was just me, everyone else was fine!) – we thanked Benn for his eclectic blend of showmanship and instructional abilities!

In case you missed it, however, there was a serious side. Benn’s approach de-mystified print and his passion was infectious as the students came away with a much deeper understanding of the exciting world of print.

In fact, I made the point, in summing up, that the purpose of this tour was to debunk three myths:

1) that print is dying

2) that print is boring

I stressed that the more a graphic designer knows about the various print processes the more empowering that makes him or her.

I also explained that the broad print industry is really three mega-sectors: commercial, packaging and signage – each offering its own unique career opportunities.

We thanked Benn profusely for his wonderful passion and explanatory powers, and also made the point that his company, Clarke, Murphy Print are a microcosm of the industry in that they have offset, digital, wide-format and POS all under the one roof – making them an ideal venue for such visits.

Jennifer Young their teacher, was also impressed with the tour and asked about the possibility of such tours being replicated in the future.

Print industry … over to you!

Related posts
5 Ways to Impress – Résumé
May 28, 2020
How Do I Find A Good Apprentice?
April 21, 2020
Ball & Doggett to the rescue of print history
March 5, 2020
How to find a good sales rep (and do they exist?) By ”VOICE OF THE INDUSTRY” James Cryer
September 12, 2019
Fisheries Inspectors get their come-uppance by the “VOICE OF THE INDUSTRY”​ James Cryer
September 9, 2019
LIA/Heidelberg Graduates Awards Night – missing in action?
August 20, 2019
Discover JDA’s Unique Print Industry Jobs Matrix